THE DOW ENDS ITS WIN STREAK

THE WEEK ON WALL STREET

The renewed prospects for a trade pact were not the only development investors found appealing last week. There were indications that the Federal Reserve might be a bit less committed to its plans to raise interest rates further this year.1,2

A LOOK AT THE FED MINUTES

There were no surprises from the Federal Reserve's Board of Governors, who released the transcript from their January meeting on Tuesday. Investors pore over the meeting minutes looking for clues about the Fed’s next move on short-term interest rates.

Fed policymakers appeared split on what might be next. Some felt another rate hike was needed to help slow the strong economy, while others favored a “wait-and-see” approach.3

In January, existing home sales were at their slowest pace since November 2015 and down 8.5% year-over-year. One factor: rising home values. Last month, the median single-family home sale price was $247,500, almost $7,000 higher than a year ago.

Mortgage rates have now fallen for three consecutive weeks, a development that may influence home buying decisions in coming months. Thursday, a Freddie Mac survey found the average interest rate on a 30-year, fixed-rate loan at just 4.35%. (A 30-year, fixed-rate mortgage is a conventional home loan meeting the lending requirements of Fannie Mae and Freddie Mac, but it is not guaranteed or insured by any government agency.)4,5

The Dow Jones and Nasdaq have posted gains for nine straight weeks and are now at levels unseen since early November. Concerns over volatility have decreased, but that does not mean it is off the table. Whatever the market does in the coming weeks and months, remember your investing strategy should be based on your goals, risk tolerance, and time horizon.2 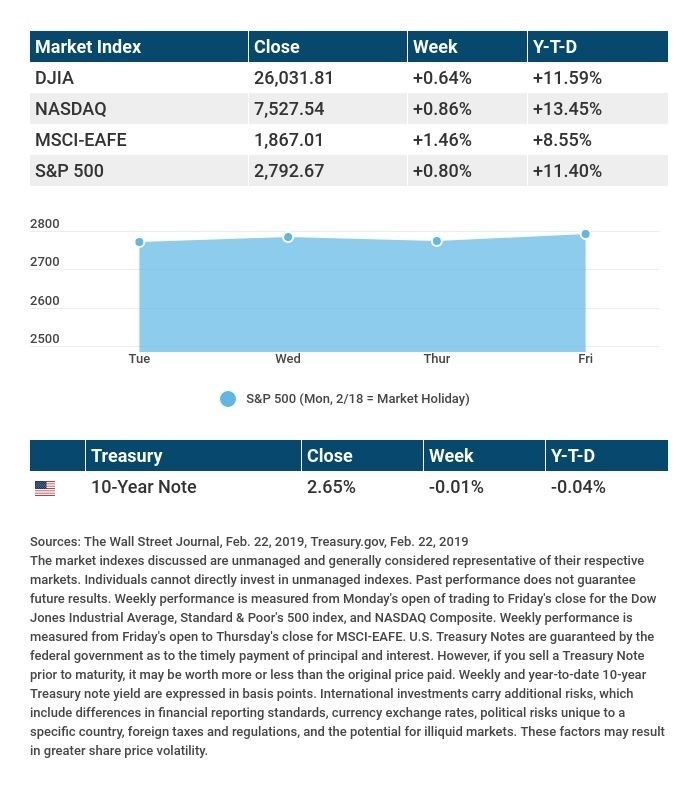