THE WEEK ON WALL STREET

Stocks ended a good week on a high note, as hints of progress in U.S.-China trade talks encouraged investors.

The development is expected to have a positive effect on consumer sentiment, which may influence the financial markets. During the shutdown, consumer confidence hit an 18-month low.3,4

Thursday, the Census Bureau announced that retail sales fell 1.2% in December. This was the largest monthly decline in more than nine years and fell short of expectations. Economists polled by Bloomberg anticipated a small gain.

Was the slow December mostly a reflection of consumer anxieties about the shutdown and the stock market? If so, it is possible that retail spending may see an uptick. (It should be noted that these monthly numbers are often revised later.)5

The Consumer Price Index, the most widely followed measure of inflation, was flat in January for a third consecutive month. Year-over-year, overall inflation is running at just 1.6%.

The CPI is one of the key factors the Fed considers when assessing the economy and determining what lies ahead for interest rates.6

U.S. and Chinese negotiators face a March 1 deadline to reach a deal to extend the current tariff truce. In March, tariffs on many Chinese imports could rise to 25% from 10%. President Trump said Friday that he is open to postponing the March deadline if it appears an agreement may be near.7 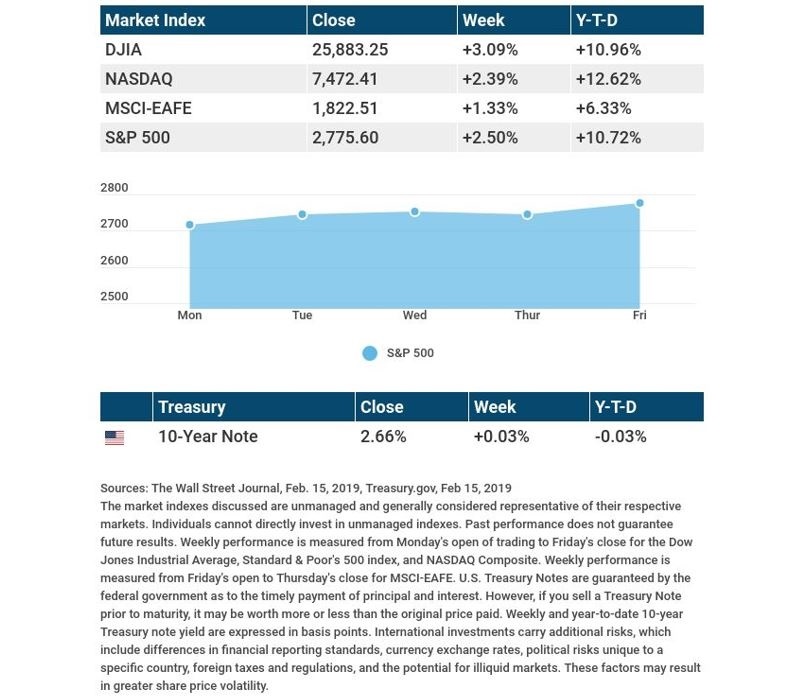